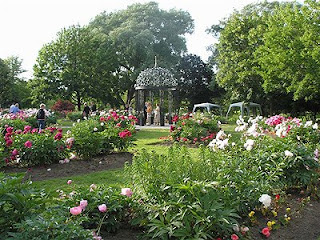 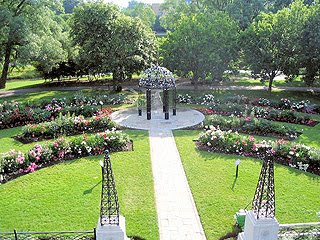 The Oshawa Valley Botanical Gardens is made up of several linked specialty gardens. The Peony Garden is the first OVBG Specialty Garden to be completed. Located at 155 Arena Street, it is conveniently situated in close proximity to both Parkwood Estate and the Oshawa Creek trail.


The Peony Garden was established during the fall of 2001, with 100 peonies donated by the Canadian Peony Society from theWally Gilbert Collection. This contribution led to the official launch of the OVBG. In 2002 and 2003 further donations from the Canadian Peony Society, as well as supplemental purchases from peony breeders and suppliers from across North America, expanded the garden. The peony collection now numbers over 275 plants and includes 250 different cultivars. The peony collection contains a balanced selection of different flower forms and colours including singles, 22% semi-doubles, 37% doubles and 15% Japanese. The succession of bloom starts around May 20th and continues through to about June 25th. The peak bloom period typically occurs during the first two weeks of June.  The Annual Peony Festival coincides with the climax of the bloom cycle in June 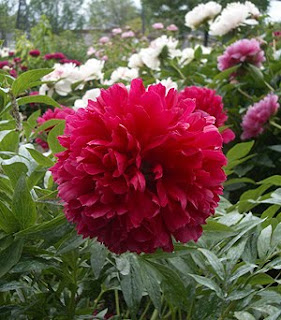 Included in the peony garden is an interesting collection of peonies donated from the estate of Wally Gilbert. Gilbert took over the nursery of a 19th century peony breeder named William Brown. Gilbert sold peonies at the nursery until the mid-1980s. He retained a large peony collection until his death. Wishing to preserve his peony collection, Gilbert's friends and family approached the Canadian Peony Society to assist them in finding a permanent home for his collection. The peonies were moved to a farm just north-east of Oshawa where their identification was verified. In 2001, volunteers from the Oshawa Garden Club, the Canadian Peony Society and the staff of the Oshawa Parks Department moved one hundred peonies to their new home, the Oshawa Valley Botanical Gardens. Included in the collection are some of the cultivars bred by William Brown and one named for Wally Gilbert's wife, 'Irene May Gilbert'.

The Peony Festival showcases the Gilbert Peony Collection. Wally Gilbert acquired a nursery from a 19th century peony breeder named William Brown. Gilbert then sold peonies at the nursery until the mid-1980s and retained a large peony collection until his death.
Wishing to preserve his wonderful collection and celebrate a beloved individual's passion, Gilbert´s friends and family approached the Canadian Peony Society to assist them in finding a permanent home for his collection.

With their identification verified, 100 peonies were moved to their new home in the Oshawa Valley Botanical Gardens by volunteers from the Oshawa Garden Club, the Canadian Peony Society and the staff of the Oshawa Parks Department. Included in the collection are some of the cultivars originally bred by William Brown.
Canadian Peony Society
The Canadian Peony Society (CPS) has been an active participant in the development of the Peony Garden, donating one-third of the peonies. The CPS also selected the remaining peonies, which were purchased from peony nurseries. About forty percent of the collection contains hybrid varieties, mostly from well known hybridizers including, Auten, Bigger, Brand, Glasscock, Hollingsworth, Kelsey, Klehm, Krekler, Reath, Sass, Saunders and Wissing. Many of these peonies are not widely known and are hard to find varieties.
The Peony Garden is located at the Oshawa Valley Botanical Gardens on the south side of Adelaide Ave. West between Kaiser Crescent and Arena Street, next to the serene beauty of the Oshawa Creek in Oshawa, Ontario.
Architectural Elements
To create a unified feel between each garden in the series, signature architectural elements have been adopted. Adding distinction to the gardens, two stunning new features were added in 2006: an ornamental gazebo and a new pedestrian footbridge.
Rotary Bridge, which was opened in celebration of the 100th anniversary of Rotary International in 2006, was commissioned by the City of Oshawa for the enjoyment of all visitors and citizens.

The stunning gazebo commemorates the 75th anniversary of the Oshawa Garden Club and creates a delightful focal point in the Peony Garden entrance. 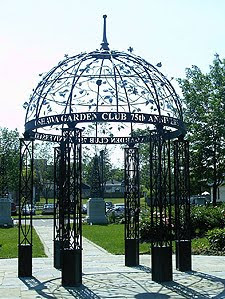 The gardens are stunning throughout the summer, with each week revealing a new treasure to be enjoyed. Photographs and plans of new garden developments will be posted on this website as they are confirmed, so visit both the gardens and this website frequently to stay up-to-date!
Posted by cps at 6:02 PM