Peonies at the Farm – A Feast for the Eyes 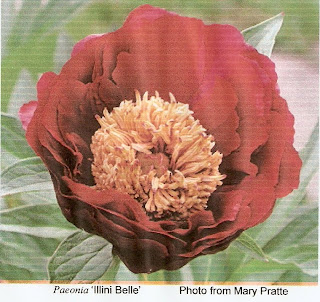 When William Saunders became the first director of the Central Experimental Farm (CEF) in the late 1880s, one of his mandates was to trial plants for their suitability to our northern climate. He achieved this goal, and considerably more. Fortunately, William Saunders was also a true Renaissance man with an insatiable curiosity about and interest in all that surrounded him. His love of ornamental plants led to the establishment of the fabulous plant collections at the Farm. Amongst them was a fairly small but select collection of fine peonies, including some less hardy tree and species peonies. Records indicate that only one of the species peonies survived over the years, and the original tree peonies are nowhere to be found.


Growing the collection
W.T. Macoun, Dominion Horticulturist, noted in 1926 that “The collection of  peonies at the CEF is a good one, including as it does, most of the best varieties…it is not planned to have a very large collection, but rather to have the best sorts so that they may be compared with novelties and seen by those who desire to establish peony gardens. There are now some 220 varieties in the collection.”
Despite plans that the collection remain small, over the years many of those in charge obviously could not resist trying some of the new peonies coming onto the market. The collection was expanded several times over the years and there are now more than 500 peonies – representing approximately 400 different cultivars – in the beds of the Ornamental Gardens.
From threatened to “spectacular”
Our impressive collection, however, was almost not to be. The winter of 1999/2000 was a tough one for the
peonies at the Farm. When spring arrived, about 70 plants failed to emerge from the wet soil and another 30 or so were on their last legs. George Vorauer, former Director of Activities for the Friends of the Farm, and I approached AAFC with concerns about the imminent loss of the peony holdings, and were much encouraged when they decided to move the plants away from the salt-covered road, provide new soil after so many years, and produced a delightful design that would house them around the oak tree near the traffic triangle. Every plant was lifted, divided, treated and replanted that fall. We have not looked back since.

The wonderful Friends of the Farm Peony Team have helped care for the peonies since that time alongside AAFC, and the results are impressive. Every Thursday morning the volunteers tend their charges – weeding, removing diseased parts, staking, keeping records and cutting them down at the end of the season. For the past few years, the Peony Team have also dedicated a day on a June weekend to give tours of the peonies,
answering questions and educating the public about the history of the collection. Many of the volunteers have also provided invaluable assistance at the Canadian Peony Society shows across the country.

The focus of the collection has shifted slightly from the original ideal of simply having “the best varieties,” into a grouping whose newest additions are either

1) peonies missing from the original collection (as far as we can discern),
2) outstanding varieties of unusual colour or habit (including Itoh hybrids, which are a cross between tree and herbaceous peonies),
3) Canadian-bred plants, and
4) plants bred by A.P. Saunders, one of William’s sons. Root purchases by AAFC and a generous donation from George Vorauer’s widow have helped us expand and ameliorate the peony beds over the past 10 years, and we hope to continue to improve this spectacular collection in the future, as it rivals or outshines any I have seen elsewhere.

The Saunders’ peonies – “Showstoppers”
We are especially proud of the Saunders’ peony collection. In the ’30s and ’40s, A.P. Saunders became one of the world’s top peony breeders. He was not the first, but certainly the most prolific, breeder of early peony hybrids, many of them sporting new and exciting colours never before seen in this plant. 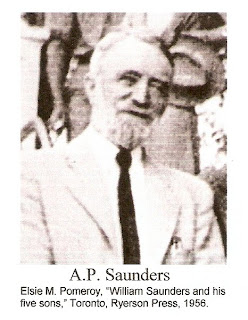 A.P.’s success came from crossing as many of the wild, or species, peonies with each other, whereas most breeders at the time and even since, use only one of the wild types, the Paeonia lactiflora, which is the latest to bloom. In effect, what Saunders accomplished was to extend the peony season by about two weeks, with
the majority of his beautiful hybrids emerging when the lilacs are still in bloom near the end of May and into early June.
He also produced unheard of colours such as lavender, cherry and creamy yellows, as well as two-toned flowers edged or with flares at the base of the petals in different, and often deeper, shades – a real feast for the eyes and showstoppers to this day when planted in both public and private gardens.
Posted by cps at 4:58 PM