Friends of the Central Experimental Farm

A Brief History of the Peonies
http://www.friendsofthefarm.ca/index.htm

William Saunders, the first Director of the CEF, brought the first peonies
to the Farm in the 1890's and began testing.

Perhaps the most prolific of both herbaceous and tree peonies of all times
was William Saunders' son A.P. Saunders a founding member of the
American Peony Society.

His work was particularly important because he brought together as
many wild peonies as possible and made crosses between them,
which had not been tried much to that point.  The result was 17,000
seedlings from which he selected only the best (a very tiny portion of
the plants he hybridized).
His groundbreaking and very methodical work brought into the peony world a new range of colours and much earlier bloom times than were available in the more common garden varieties of the day.


A. P. Saunders was born in London Ontario and moved to Hamilton College in Clinton, New York to teach. Although this is where he did most of his peony breeding, he spent summers at the Farm and would work here with his father and his famous brother Charles (the one who developed Marquis wheat) on plant breeding techniques.


In 1998, the complete collection of all peonies at the Farm was down to around 220 plants. All were lifted, cleaned and divided by Agriculture and Agri-Foods Canada in 2000. Major restoration work on the peony beds in the Ornamental Gardens has been completed. Some gaps remain to be filled and duplicates removed. 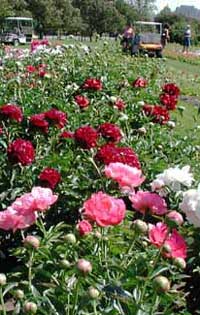