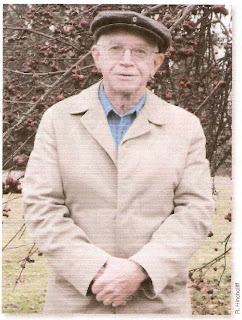 Bill Wegman remembers the exact moment that gave rise to his passion for peonies. It was in the mid-80s and while leafing through “one of those fancy catalogues from a mail order nursery” a heritage peony caught his eye.
At that point in his life – married with three young children, and a communications engineer (civilian) with the Department of National Defence – Bill’s gardening pursuits were limited to growing vegetables – a holdover from watching his mother tend a vegetable garden on the family farm where he grew up in North Pelham, in the Niagara Peninsula.

Although ‘Doris Cooper’ beckoned from the catalogue, Bill knew next to nothing about peonies. He just knew that he wanted Doris. So Doris was purchased, planted and nurtured. She became the centerpiece of Bill’s slowly expanding garden – a small collection of hand-me-down peonies.

‘Doris’ wins best of the show
It was another 10 years – when he retired from National Defence in 1995 – before Bill got serious about peonies. “I was growing them, but really didn’t know very much about peonies,” he admits. Now with time on his hands, Bill turned to the Internet for information and several years later came across the newly formed
Canadian Peony Society, which was planning an exhibition in 2001 at the Governor General’s in Ottawa.

By now, ‘Doris Cooper’ was a beauty – “at least in my eyes,” says Bill – so he entered her in the show. Bill was justifiably proud of his heritage peony – ‘Doris’ won best of the show. Bill now has two “bests of the show” to his credit, although he is quick to downplay the accomplishment. His own peony collection now numbers over 100 named cultivars as well as 150 three to four-year oldseedlings and several hundred younger seedlings.

Peony “collection at the Farm is so diverse”
The Canadian Peony Society’s exhibition brought Bill and Mary Pratte together, and Mary introduced Bill to the Friends of the Farm. “I thought I should learn more about peonies,” Bill explains, “so I joined the peony team the next summer under George Vorauer. It was so interesting, the collection at the Farm is so
diverse, and I learned so much from George.” Bill proved a quick study and was invited to replace George when he retired in 2002.

Bill admits to spending the bulk of his retirement on peonies – growing and tending his own, heading the Friends’ peony team, and looking after the Society’s seed distribution program (collecting, packaging and mailing out seed orders). Bill’s own yellow Paeonia mloksewitchii (the only yellow herbaceous peony),
which he grew from seed, is a standout – and now he is venturing into hybridizing. As he explains how to
grow from seed, it is clear that the painstaking process is well suited to the meticulous mind of a professional
engineer.

A busy and productive life
Chatting with Bill on a cold January morning, I presume that he can’t wait (like many gardeners) for spring to bring his peonies back to life. “Not at all,” he laughs, “I look forward to this time of year – it is a chance to rest and relax and to plan for next year.” It’s also time for Bill to pursue his other hobby – stamp history, which often plays second fiddle to peonies. Peonies and stamps consume considerable time and energy but he and his wife Gail also spend much time with their two grandchildren who live in Ottawa. They regularly babysat Rebecca and Peter when they were small, and still turn up three mornings a week to see Peter on the school bus. Rebecca and Peter have been an important part of Bill’s life in retirement: “It’s been interesting to watch them grow up and good to be part of their lives.” Bill also manages to squeeze in trice-weekly workouts at the RA centre. Rushing out to meet Gail, Bill’s final words say much about his busy and productive life: “So many people our age go away for the winter – I often wonder how they do it  I just don’t have the time.”
Posted by cps at 6:46 PM