Rowancroft Gardens had its beginning in 1914 created by Miss Mary E. Blacklock.  She had purchased 5 acres (2ha) of Lot 10, Con.3, WHS,(west of Toronto Airport in Mississauga. It was just South off the Malton Sideroad, now Derry Road, west of Hwy 10 on East side of Credit River) in October, 1913 for $1,500.00 from Francis Jackson and established a botanical garden.  She lived in a two storey Georgian style home of wood siding construction.  On April 10, 1918 she purchased another 2.4 acres (1ha) for $732.00 from Goldwin Smith.  By 1920, business was booming so well she had 7 people in her employ, that were required for eight months of the year. She hired several others during the growing season. 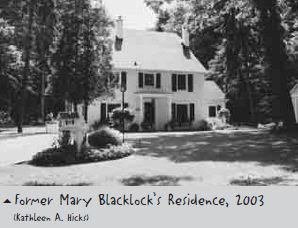 It was a favourite spot for people to stroll, especially in June when peonies were in full bloom.
Miss Blacklock was born in Hastings, ON to John and Louise Blacklock.  When she was a young lady, her family moved to Toronto, where her gardening expertise was nurtured and took root.  She planted a garden at their Davenport Road home.  She sold plants for 5 and 10 cents and 25 cents for shrubs and donated the money to St.Annes Anglican Church Building Fund.
She started correspondence with horticulturalists and collected seeds from all over the world until she had an outstanding collection of flowers in her garden and tremendous knowledge.
Upon her fathers passing in 1910, she started to travel to visit the horticulturalists she had been corresponding with.  She visited the Kew Gardens in London, England the gardens of Frenchmen, near Tours, France.  Here she found peonies, which became her passion. From Mons. V. Lemoine in France, she was introduced to lilacs she adored and would transport to Canada.
In 1914, before the start of WWI, she established Rowancroft Gardens.  Her french peonies and lilacs were much appreciated when she introduced them here.  Seeds from this stock replenished their supply of lilacs, of which the fragrance was thoroughly enjoyed during the blooming season in the spring.
She entered floral competitions at Horticultural Shows around the province.  She took first prize at the Toronto Horticultural Show for her irises and a first at the London International Show for peonies. In 1915, Miss Minerva Swann Castle began to work with Miss Blacklock as a helper. She was tremendously horticulturally conscious and gardeners began to flock to Rowancroft Gardens to learn from her astonishing plant knowledge. It was said that she had an intense interest in all growing things, the capacity for hard work, and a keen sense of humour that endeared her to the customers in the village.
Miss Castle, as a member of the Meadowvale Women's Institute, was instrumental in starting up the first library in Meadowvale in 1929 and she became the first Librarian.  In 1937, she served as the president of the Streetsville Anglican Church Chancel Group.  On August 7, 1941, she purchased a piece of property from Miss Blacklock and had a one and a half storey three room frame house built on the same laneway and was given the right-of-way to get out to Derry Road.  She was a founding member of the Credit Valley Conservation Authority in 1954 and was also very active with the Toronto Garden Club for many years.
Miss Blacklock passed away in 1956 at her home in her 96th year.  Upon Miss Blacklock's death, Minerva Castle became partners in Rowancroft Gardens with Miss Ethel Winter.  Their business flourished.  Miss Castles favourite peony was Grace Adams, named for one of the Garden's workers.  It was a large white bloom with golden stamens in its center.  Miss Castle became known and respected across Canada for the supreme stock and as being one of the countries best plants-men.  She was an accomplished grower of peonies and perennials.  Her peonies were shipped as far as Australia.
In the 1960's a Rowancroft catalogue offered seventy peonies for sale.  Most of the peonies were available for $1 or $2 per plant.  Eight of those listed were cultivars hybridized by Miss Blacklock and two by Mr Brown who had a peony nursery in Elora, ON.

Blacklock cultivars were not officially registered with APS.  Most of them do appear in Peony Check Lists compiled by Mr. and Mrs. Byron Gist in 1956 and published in the APS application,  History of the Peonies and their Originators, 1976.   In that publication , it notes that a list of Miss Blacklock's peonies appear in APS Bulletin 93.  Dates suggest that her peonies were bred before 1935.  Unfortunately, two of the Blacklock cultivars have names that are duplicates of other peony cultivars.  The name Chalice was also used by A.P. Saunders and the name Polly Prim by Mr. Auten.   Details can be found in the APS History lists.  There is a connection to the Dominion Experimental Farm in Ottawa.  The cultivar W.T. Macoun is named after the man who hired Isobella Preston to work on ornamental horticulture at the Farm.  Miss Blacklock probably new the people at the Farm.  Miss Preston's lilies are included in the catalogue.  In 1936, the APS Annual Show was held in Toronto.  There is a brief reference to one group of show winners on page 39 of the APS publication, American Peony Society, 75 Years. Miss Blacklock took third place in the category requiring 100 stems with at least 80 named varieties!  She was the top Canadian.  The Rowancroft collection of peonies were from Hybridizers such as Dessert, Crousse, Calot, Kelway & Lemoine as well as Brand from the US and Kelway from England.  The collection was very old and reflects the fact the nursery was in its prime before WWII.  Most of these cultivars were introduced by 1925 and there is no evidence of the many hybrids introduced during the Great Depression.

Miss Castle had been presented with many awards over her lifetime:
1961 Britains Royal Horticultural Award of Merit for the "Sorbus Rowancroft Pink" Coral Mountain Ash
1964 Dominion Life Membership Pin at the 75th Anniversary of Trinity's Church Women's Auxillary
1967 Federal Government's Centennial Medal  for Red Cross involvement and contribution to the horticultural industry
1969 the first Gold Medal ever presented from the Toronto Garden Club for achieving most outstanding contribution to Horticulture in Canada presented by Dr Leslie Laking

Miss Castle passed away January 1, 1976 at age 84. The service was held at the Streetsville Trinity Anglican Church on Monday January 5 with services conducted by Reverend David Busby, Rev. David Adams and Lay Reader, Sam McCallion. She was buried at Mount Pleasant Cemetary in Toronto.
On Friday October 21, 1977, over 100 people gathered to pay tribute to Minerva Castle at the Meadowvale Community Hall.  Organized by the Women's Institute, of which she was a devoted member since 1910.  Councillors Hazel McCallion and Larry Taylor, Chief Librarian Noel Ryan and Rev. David Busby assembled for the unveiling of a plaque that would be hung in the Community Hall.  Unveiled by a relative, John Beck.  It read "To commemorate the Generosity of Minerva S. Castle to the Village of Meadowvale, 1891-1976."

Before Miss Castle passed away her property was sold to Frank Baldesarra, who lived in the village of Meadowvale.  He has quite a history with the property, where he has built himself a spectacular two storey red brick mansion.  He tore down her house in 2002, and rents the elegant Blacklock house at 1160 Derry Road.
Posted by cps at 6:19 PM