Mr Milton Jack bought property from Wm McEwen and Tom Catherwood, and launched Ferncliff Gardens at Hatzic in 1920. There, he hybridized and developed new forms of gladioli and other flowers, which were shipped to customers throughout North America, and sent to major shows and competitions. Where blooms were entered for competition, over fifty first prizes were won, the great majority of these being won by Mr. Jack's own originations; many of his varieties are successfully grown as grand champions in international shows.

On September 18, 1947 the Fraser Valley Record ran a story in which Mr. Milton Jack explained how the Bulb Industry had developed. The paper reports that Mr. Jack had recently returned from visiting a number of the major gladiolus shows in the Pacific North West area where he displayed his own originations.

In 1953 Mr. Jack was awarded a Bronze Plaque for his conspicuous contribution to advancement of gladiolus from the North American Gladiolus Council.1 Mr. Jack was selected for the award because of his contributions during the past 30 years in hybridizing and developing new varieties of gladiolus. The award was presented for the first time to anyone living in the Pacific Northwest.
In the forties and fifties the private gardens and the Jack family home was the scene of the annual "Strawberry Social" tea of the Hatzic United Church.


Milton Jack Peony Introductions
Linda K Jack - 1970 - Double, large, deep, rose-red, highly fragrant, late.
Good stems and strong growth.  Not offered by Ferncliff since 1992.
Named for a daughter of Milton Jack
Milton Jack - 1980 - Semi Double to Double, rose-red, excellent petal texture;
flowers stand up well, good stems; early midseason
Mimi - 1974 - Japanese, clear medium pink with golden stamens, free blooming
midseason, resembles Do Tell.  No longer in commerce;
last offerd by Ferncliff in 1985
Unknown Soldier - 1949 - Ferncliff Gardens received this plant mixed in with a shipment
of peonies from Holland, and was unable to identify it, so gave it the present name.
Flowers are double, cerise red, lightening with age, with ruffled petals, rose or semi rose
form, with stamens near center usually hidden but occasionally showing. Reasonably
strong stems, but may need support. Blooms late midseason. Good fragrance for red cultivar.
Reverend Milton Jack was born in Chateauguary, Quebec and educated at McGill and Chicago universities. He entered the Canadian Presbyterian Mission in 1905. He was principal of the Theological Training School in Formosa and later joined the faculty of the University of Seoul, Korea. He also did missionary work on Formosa and the Chinese mainland, where he contracted malaria. After a lifetime of recognition, Mr. Jack passed away at his home on December 5th ca 1964 at the age of 88. He was survived by his wife Catherine Winifred Jack; two sons, Lawrence and Wilfred (operated business along with his father); two daughters, Miss Elsie Jack and Mrs. Gilmour (Marjory) Clark and eight grandchildren. Pallbearers were Ross Clark of Vancouver, Robert Jack, David Jack, Colin Jack, Jack Peetoom and Al Pethybridge.
The 1975 Ferncliff Gardens catalogue states remittances were payable to W.R. Jack 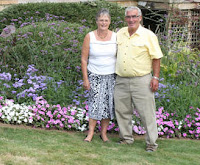 David Jack - grandson; continues to operate Ferncliff Gardens with his wife Sheila. In 2008, they were awarded a special recognition by the Mission Community Heritage Commission for continued operation of the pioneer family business. David, the dahlia expert, has been growing dahlias for over 40 years. David graduated from the University of Guelph with an Ontario Diploma in Horticulture (O.D.H.). 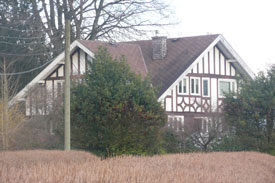 The Jack home, built in 1922 is two stories, Tudor style white stucco with brown trim, at least 6 small windows on the second story, 2 larger windows on the first story. The interior includes spacious well-maintained rooms, which provide a gracious setting for many gatherings and special events.
Rural farmland features fields of flowers. The owner's personal gardens comprise about 3/4 acre.


Daughter Elsie Jack remembers that the private flower garden at Ferncliff became very lovely over the years. A spacious terraced lawn over looks the valley. To the north a wide border of trees and Azaleas. A border of low growing Juniper marked the boundary where the hill sloped steeply down in front of the Juniper, Azaleas, Dwarf Shrubs and Perennials. On the west side a pergola about sixty feet long covered by wisteria, and some other climbers along the way marked the end of the lawn. Below the Pergola on a slope was her father's hobby, a rock garden, full of unusual Alpine plants.

Ferncliff Gardens is an internationally acclaimed "pioneer flower farm" located at 8502 McTaggart Street V2V 6S6 in Hatzic, just east of Mission. Pioneers in the horticultural mail order service and hybridizing of new varieties of flowers, the members of the Jack family have adapted their business over the past eighty-eight years, (1920 to present) making it the oldest family operated business in Mission.
The property includes 10 acres of farmland and the private residence. The house sits on the eastern end of the farmland overlooking the eastern Fraser Valley.
Posted by cps at 4:38 PM