A Passion for Peonies

I imagine we are all familiar with the old bromide about dogs and their owners, and I wonder if it can also be said that plants and their experts eventually grow to resemble each other? After meeting Mary Pratte, peony expert, I’m prepared to make the case.  Whoever has seen the peony – a quintessential sign of summer’s arrival in our town – gracing gardens with its sunny, bright, open flower faces, will recognize Mary. 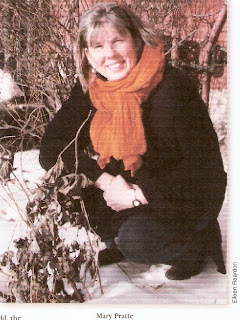 There is also the question of determination and perseverance. Peonies don’t give up easily and neither does Mary. She has used these qualities to transform numerous peony collections, including the wonderful collection at the Central Experimental Farm.

Mary first drew breath in 1955 in Cincinnati, Ohio, and because her parents were Canadian was able to claim dual citizenship. Her father’s job with Procter and Gamble took the family to the Philippines, Switzerland and England, but despite living throughout the world, the family retained strong ties with Canada – particularly Southwestern Ontario – where they vacationed annually at a cottage on Lake Huron.

Interest and immersion in horticulture… and peonies
Mary’s schooling took her eventually to the University of  Western Ontario. She subsequently became an elementary school teacher, married and had a son, now 25. And, as far as the Friends of the Farm and peony fanciers are concerned, that might have been the end of the story but for two things.

First, the years in England as a child set the seeds for Mary’s passion for peonies. To this day, she retains vivid memories of the peonies in the gardens where she played and of the beauty and scent of the cut flowers her mother brought into the house.

Second, after teaching for 10 years, and now living in Ottawa, Mary’s love of plants was blossoming. In the early 1990s, she followed her heart and took a two year sabbatical to attend the horticultural program at Algonquin College, obtaining a certificate in horticulture. Her interest and immersion in horticulture took her to garden clubs that often sponsored lectures on various topics. One in particular caught Mary’s fancy and prompted a modest outlay of $5 to become a member of the Canadian Peony Society.

Unlike the peony she resembles in other respects, Mary has a humble side and downplays the attributes that took her from ordinary Society member to vicepresident to president. However, given Mary’s significant achievements in the peony world, I think we must admire her humility while acknowledging not only her expertise and contributions but also her enthusiasm and leadership ability.

Transforming the Farm’s peony collection
The Society is one aspect of Mary’s connection to peonies, her involvement with the Friends of the Farm
is another. She became a riend of the Farm in the early ‘90s but, oddly enough, did not first visit the Ornamental Gardens until about 1999. At that time, the Farm’s peony collection, which had flourished and faded several times over the years since its inception in the 1890s, was looking decidedly pathetic. Mary was roused to action and, with the help of George Vorauer and Agriculture and Agri-Food Canada (AAFC),
undertook the daunting and ongoing task of revitalizing the collection and bringing it up to a standard befitting its location in a national historic place. She continues to be the Friends’ peony advisor.

In addition to advising on the Farm’s peony collection, Mary has taken her expertise farther afield, from her own personal collection, which now numbers nearly 150 plants, to helping to restore the collection at Les Jardins de Métis/The Reford Gardens in the Gaspé, to organizing two of the Canadian Peony Society’s annual shows at Rideau Hall.

When not directly involved with peonies and other horticultural research, Mary is an avid traveller and often
combines travel and horticulture to visit other gardens of interest.

Taken with permission from Friends of the Central Experimental Farm Spring 2010
written by Eileen Reardon
Posted by cps at 5:44 PM