STAMP OF APPROVAL MAIL IT WITH FLOWERS: 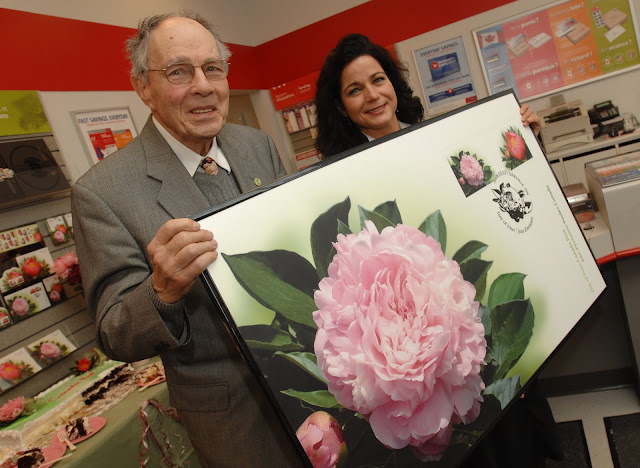 Oakville resident John Simkins gives his stamp of approval to the release of two Canada Post stamps dedicated to peonies. Simkins is a well-known gardening expert and founder of the Canadian Peony Society. Helping him hold a plaque commemorating the stamps is Sheila Black of Canada Post. 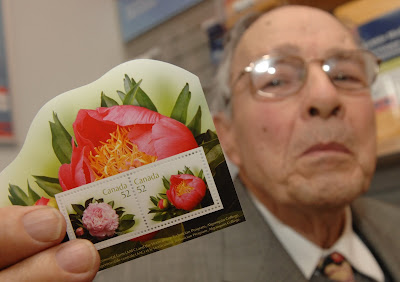 Information below provided by Canada Post on the occasion of issue of two peony stamps March 3, 2008

Two of Canada's most popular flowers are featured in new stamps for 2008.  On March 3, Canada Post will issue two stamps dedicated to peonies (Paeonia lactiflora).  The stamps capture two Canadian hybrids in all their blooming glory: the 'Elgin' and the 'Coral n Gold'.
The 'Coral n Gold' hybrid was named for the appealing colour combination of its blossoms.  Bred by Lyman Cousins in London, Ontario, the 'Coral n Gold' features a cup of bright petals surrounding golden stamens.
To photograph appropriate specimens, Isabelle Toussaint, a freelance designer in Montreal, travelled to Ottawa and visited greenhouses at the Central Experimental Farm and Algonquin College.  In the design, Toussaint created a soft, neutral background and used close-cut and shadowing techniques to emphasize the blooms and foliage.  "I love to work in my garden, although I'm by no means an expert," says Toussaint.  "The challenge was to create a stamp that mimics the impact that peonies have - when they flower, they make a bold statement."
The peony stamps continue Canada Post's informal tradition of issuing floral-themed stamps in the spring.  Previous stamps have featured daffodils, lilacs and gardens.  The spring issues have proven popular not only with collectors, but also with people sending out invitations to weddings and parties.
The domestic rate (52¢) stamps will be sold in booklets of ten; official first day covers and souvenir sheets will also be available.
Note the number of stamps printed:  12 million stamp booklets, and 275,000 Souvenir sheets of 2 stamps.
Official First Day Cover (OFDC) - Cancellation Oakville, Ontario
Product No. & Quantity: 413696131($2.04-23,000)
Canada Post gave members of the CPS complementary copies of an Official First Day Cover.  A fitting souvenir which celebrates the launch of two peony stamps.  We are pleased to pass on this collector's item to all current members of the CPS.
Posted by cps at 8:03 AM