At the Root of the Matter

This article begins with my account of how a desirable peony was given away, or so I thought, only to return just three years later, and how this led me into an investigation of peony roots.


I had planted a packet of Maurice Menard hybrid peony seeds. Those herbaceous seedlings all bloomed for the first time in 2009. One was particularly handsome having very early, self-supporting, large single salmon pink blooms. My garden is not large so I decided to give the robust plant to a fellow gardener who had space. It was still a young plant so I did not anticipate a problem until I began digging: many thick metre-long roots radiated outward in all directions. I would have to break some if I was ever going to move this plant anywhere. I reluctantly severed key roots about 30-40 cm from the crown and, with some difficulty, levered the root ball onto a carrier. My neighbor was warned that he would need to prepare accordingly but I now had a large space for something else. I filled the hole, planting cherry tomatoes in 2011 and then pole beans in 2012.


That year, I noticed some strong leafy peony shoots emerging in from the periphery of the hole. I thought that these might be tardy seedlings so was careful not to damage them. In 2013, each stem bloomed, which is when I discovered that what I thought I had given away had returned five-fold. Each crown showed that it had arisen from adventitious buds that had formed on severed roots of the original plant. Five identical but separate blooming stems demonstrated that this peony did not intend to leave my garden unless every last root remnant was removed.

If we consider the behaviour of this peony, we may deduce that roots are not merely the below ground portion but designed to carry plants through hard times, and might even help ensure species survival if a large part of the plant mass is lost to natural disaster. As far as I am aware, adventitious bud formation does not seem to be a universal trait but peonies having this survival capacity could potentially move to a more suitable, perhaps better drained or brightly lit habitat. 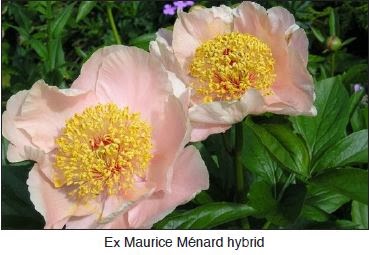 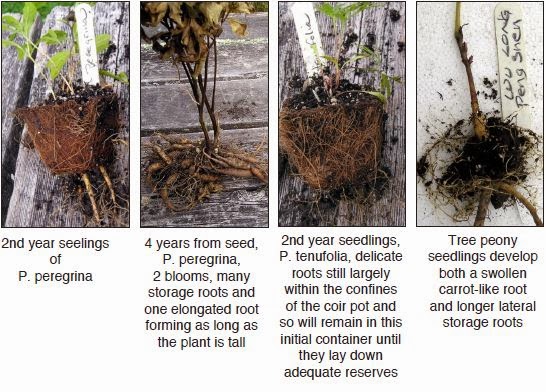 Root formation is important to peony survival both in nature and in the garden. Herbaceous and woody (tree) peonies, whether germinating seeds, seedlings, or adult plants, all depend upon their roots to absorb water and mineral nutrients. The integrity of the first seedling root is essential to the later development of the first shoot. The success of that first small leafy shoot to expand and photosynthesize is critical to seedling survival into the next growing season. Even small leaves can produce a surprising amount of photosynthetic product – sugars that are converted to starch, which is deposited in a rapidly swelling, carrot-like storage root. Without adequate starch reserves, over-wintering buds will lack energy to expand to form a new leafy shoot the following season.

Consider the process by which starch is formed and stored. Healthy foliage is needed for photosynthesis. Sugars are thence transported to roots where starch is accumulated. The process takes time, ending as frost first nips the foliage. This is one reason why we should wait until late autumn before dividing or moving a plant. We should pay close attention to having a good amount of storage roots with the desirable ‘eyes’ whenever dividing a plant. Having a division with five or more ‘eyes’ but inadequate quantity of starch-filled roots could set recovery back by one or more seasons.


Lastly, considering seedlings, you will note from the images how different species produce starch-storage roots at different developmental stages. The tree peony seedling is typical: starch is deposited in a swollen stem below the soil surface. By the 3rd year, more typical storage roots form as well. Paeonia tenuifolia has small delicate leaflets in its first years and is quite slow at producing storage organs. In the image, we can see how next year’s shoot buds are already expanding, perhaps getting a jump-start by using photosynthetic product formed by the present leaves. Fragile buds and small root system indicates to me that these seedlings should not be disturbed for at least one more growing season. I find that coir pots are perfect to shelter such seedlings during the vulnerable first years.


Seedlings of P. mlokosewitschii and  P. peregrina quickly form storage roots. Second year seedlings already have a couple of such roots. One four-year seedling blooming for the first time had copious roots when dug this autumn and was also beginning to produce longer storage roots. I have learned my lesson: it is time to move these!

Marilyn Light gardens in Gatineau, Québec, where she enjoys raising many plants from seed. The joy is in seeing the first bloom, having fragrance, and later seeds to share through the exchange.