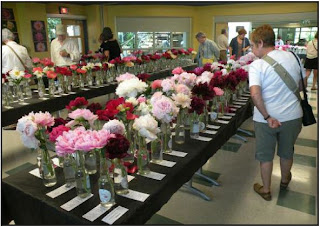 by Rock Giguère
I am sending you a global view of the Quebec Society’s Peony Festival show which took place June 16 and 17th at the Roger Van den Hende Botanical Garden. It was the largest peony show to date in Canada with almost 1,200 cut flowers and many complimentary events. All this to say that the event was a great success.

First of all, I would like to thank the QPS President, an infatigueable and determined Dutchman, who coordinated the project to its end, like Gulliver, against all odds, relying on the competence of his fellow crew. Bravo. His wife, Lise, assisted him as always.

I convey other comments and thanks.

This event was the ongoing work of the entire Board – Yvon Allen, Rock Giguère, Lucie Pépin, Jacqueline Gervais, Claude Quirion, Serge Fafard et Robert Rioux who despite being sick wrote  almost every day to encourage other members of the Board in their work.

Our second round of thanks goes to our Quebec hybridizers, François-Léo Tremblay, Les Fleurs
Maltais and Serge Fafard who showed us their formidable talents.  We think that this is a turning point in our shows, because it demonstrate the competence and the specialization which is beginning in Quebec and the world of peonies.

We were delighted by their creations. To the people who were busy at the site, a thankless task, often
overlooked, but very important –Jacqueline Gervais and Christiane Lafrance, thank you for your
attention to the details.

A big thanks to the University of Laval authorities, especially to the Dean of the Faculty of Science for Agriculture and Food, Jean-Claude Dufour, who permitted us to use the university facilities and who gave much assistance to our Festival.

The site was perfectly suited to our Festival – the locale, parking, security, etc.

Special thanks should go to Hélène Corriveau, whose impeccable maintenance of the Botanical Garden and, most of the Peony Garden welcomed us in all of its glory. The collection benefited from the generous donation of peonies from Serge Fafard. Visitors had access to the garden both before and after the Festival.

To Pierre-Claude Poulin, President of the Friends of the Van den Hende  Botanical Garden, our gratitude for his personal assistance and that of the volunteers from the Society – our good friends Michel Bédard, Jacques Allard and Jean-Denis Brisson.

Thank you to Blaine Marchand and Mary Ann Robinson, members of the board of directors of The
Canadian Peony Society for their visit to Quebec. It was very appreciated.

The Festival was greatly assisted by our journalist friends who promoted the Festival: Larry Hodgson, Albert Mondor, Mélanie Grégroire, Claire Bélisle and Réjean Millette. Thanks also go to TVA, which allowed Rock Giguère to make a report on the show Salut Bonjour, Week-End on the event and on peonies.

And thanks to our friend Robert Petitclerc who opened his garden to peony lovers on Saturday, June
16th and to our beautiful Italian, Mano Capano, whose fields of production were open to the public for the occasion.

To Wim, the brother of our President, a special thanks for agreeing to be the designated driver of the President for all of the weekend. Wim also assisted us ably in several tasks.

And finally, many, many thanks to those who contributed cut flowers – Serge Fafard, Mano Capano, François-Léo Tremblay, Les Fleurs Maltais, Renée Pichette of the Montreal Botanical Garden,
Yvon Allen, Claude Quirion, Pierre Roy and Lucie Pépin. Bravo to them for the prizes they won.
Without them, the successful exposition would not have been possible. 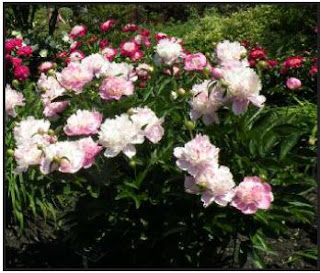 And lastly, in case we may have forgotten some who contributed, our gratitude to each and everyone of you who contributed to the successful weekend. Onward we now go to the Peony Festival in Chicoutimi June 23 to July 2nd and to next year’s Festivals in Rosemère and Saint-Georges de
Beauce in 2013.
Posted by cps at 1:25 PM