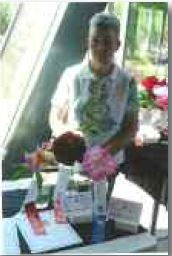 Carol was born in Simcoe, Ontario to Dorothy and Dwight Van Vezler She worked as an EEG (Electroencephalography) technologist in many countries, including England, the United States and Canada. She retired from the Alberta Children’s Hospital in June 2002.
She travelled extensively to Europe, Africa and Asia. Carol was a tireless volunteer in her retirement years.  Although her main passion was the Sheltie Rescue Society where she found homes for many rescue dogs, she also loved her gardening. She always came to our Calgary CPS meetings despite the weather and sometimes with a few rescue dogs in tow! Carol could always be counted on to help with any of our projects, especially our hosting of the annual CPS show a few years ago.
She was able to share her time with the Calgary Horticultural Society, the CPS and the Lougheed House. Her beautiful garden won many awards. She had an outstanding collection of peonies and hostas. Despite Carol’s illness, she was still the courageous volunteer and showed up at the CPS booth and the Lougheed House booth at the Garden Show, April 2012.
A garden party was held at her home, the first week of July 2012, to remember this wonderful lady.
Posted by cps at 6:33 PM