Every year, the Prairie Peony Society Annual Show starts with enthusiasm and high expectations.  This year was no different.  However, the weather may have lowered the enthusiasm and expectations somewhat in the weeks preceding the show. Regina (where most of our members reside) experienced hail, high winds, and one night very close to freezing then extremely hot weather.  Lots of members were saying that many of their peonies were done or close to being done prior to the show.  As seems to be typical of our show o matter which weekend we hold it, the temperature soared for the two days of our show.  Thankfully, the venue where we held the show, the Cathedral Neighbourhood Centre, had air conditioning.  The temperature must have been set perfectly because the peonies didn't close up during judging, which happened at one of our previous shows.


The Thursday before the show, a few Prairie Peony Society members began setting up tables, hanging the curtain behind the Court of Honour, putting out informative signs, putting together the flower vases, and establishing space for each category in the show.   Set-up was complete within three hours and would make it considerably faster for members to get their entries ready the next morning.

On the first day of the show, many members were in early (around 7 a.m.) to prepare their peonies and floral art for display.  Three hours are generally set aside for this preparation prior to judging.  Some of our members have a large number of varieties of peonies to display and this year was no different.  Every last minute was used to get their entries in on time.  Once all entries were ready, the judging began.  This year, Delores Nelson judged Artistic Floral Design and Goblets ad Bowls.  Bernie Zaharik judged all the peony entries.  Clerking was completed by Dorothy Rogers, Brian Porter, Shelley Brenner, and Gladys Ning.  Photography was judged by Shelley Brenner, Dorothy Rogers, and Gladys Sykes.

Public viewing began Friday at 1:30 p.m. and went until 8:00 p.m. that evening.  On Saturday,, public viewing began at 10:00 a.m. and went until 3:45 p.m., at which time, our President, Doug Bradford, gave a small speech and introduced Anne Leskiw, one of the original-founding members of Prairie Peony Society.  Anne was there to pass the original guest book to Doug.  It signified a changing of the guard and the start of a new beginning for our society.  After the change Doug indicated that for a small donation, the public could take home some peonies that any of the entrants didn't want to take home with them.  This is an incredibly popular tradition that we have at the show.  Lots of people showed up near the end to take in the displays and then waited around for the peony dispersal.  This year proved to be better than previous years for donations as we pulled in almost $300.00 which is the most we've taken in recent years.

This year, a number of peony categories remained empty.  That could be attributed to the weather, the change in show dates (one week later this year than previous years), or possibly both.  In the past, our Annual Show has been the second-last weekend in June.  This year our new President, Doug Bradford, changed the show dates to the last weekend in June after polling the members.

Doug explains:  "By adjusting the annual show date by five to seven days, (from) June 22nd (to) June 29th for the Prairie Peony Society, (it) gives members an opportunity to showcase different cultivars and the public an opportunity to view different peony blooms as was the case this year when considerably fewer hybrids but many more lactifloras were on display."  The Prairie Peony Society members still managed to pull together 185 entries in peony stems, 12 entries in photography, 20 entries in Artistic Floral Design, and six entries in bowls/goblets for a show total of 223 entries.

The most heavily entered section was pink Japanese lactiflora peonies with 20 entries.  The light pink double lactifloras were second at 13 entries and the white lactifloras were third with 11 entries.  We had a few more Artistic Floral Design entries than previous years.  The category where the design was to be in an unusual container sparked a lot of creative juices for our entrants as we had some truly clever designs in that category.  It was also the most entered category of Artistic Floral Design with 7 entries.


This year, the Prairie Peony Society Annual Show started with enthusiasm and high expectations, which may have initially been lowered.  However, we had a great show again this year.  Everyone enjoyed themselves.  The peonies were pretty nice considering the weather before the show.  Lots of people remarked how nice the fragrance was in the show room, and members of the public got to go home with some exceptional blossoms.  I think we're all looking forward to next year with renewed enthusiasm.  How could you not be enthusiastic if you saw the variety of peonies that we can grow right here in Saskatchewan? 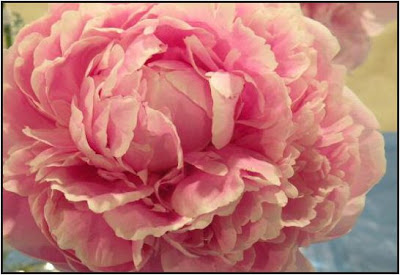