I have never attended one of our AGM’s, and after serious thought decided it was time. By the end of the weekend I did not regret my decision.

Day 1: As we put our overnight bags into the car Saturday morning I was a little apprehensive about the weather. It was overcast and they were saying the weekend would be a wash out. On our drive to Oshawa the skies were gray and it poured on and off. Upon arriving in Oshawa we decided to check in at the Best Western first, get our bearings and see if by chance we could get into our room early. The motel was very accommodating and allowed us to check in and the front desk gave us easy directions to OVBG. We drove to the Flower Show with another torrential downpour thinking that this show was going to be a washout. 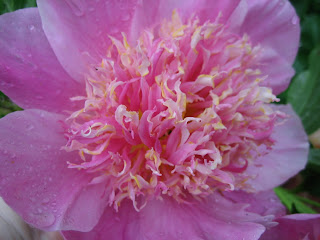 Pulling up to the front gate, parking was to capacity and we had to park down the road. Good thing we brought two umbrellas. We walked into the grounds to find hundreds of people viewing what was left of blooms and taking pictures, yes, taking pictures in the rain. (Me included) Hubby made a great rain catcher standing over me with the umbrella while I took over 200 photographs of blooms.
We were to man the CPS booth from 2 to 4pm and I wanted to take in every bit of the grounds before then. There were several booths located around the peony beds filled with artisans selling painted floral’s, including peonies, a man who created metal flowers for $60.00 and a horse out of metal going
for $6,000.00, this man also did all the iron work at OVBG(railings on bridge, obelisk in center of peony garden, front entrance), the Oshawa Camera Club with photo’s of peonies and examples of photo’s taken by the club for competition. Beside the CPS booth was the Master Gardener’s and across the way was an information booth. Overall the OVBG was very well set up and extremely busy despite the weather. 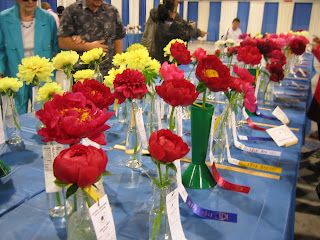 Inside the Flower Show was being judged and people were anxiously awaiting the moment when all could be viewed. At 1:00om the doors opened and hundreds poured in to view the blooms and take even more photographs, ask questions and attend the lectures ongoing throughout the day. I found one of our members taking care of a beautiful Ikebana display featuring peonies and stopped to chat and find out more about the AGM that would be happening later.


The current Board has never actually met each other and Blaine decided to have an impromptu Board meeting and this went on during the time I was supposed to be in the booth. Hubby however manned it with another member and thoroughly enjoyed the experience. Sharon Yu and Hubby chatted with many passersby, sold cut peony blooms and gave out pamphlets. 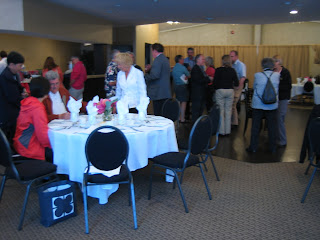 The meeting and dinner were a blast. Our president (Blaine) had everyone do a quick introduction of themselves and where they had come from. We got down to business and then the hotel cleared the chairs away to make ready for the next event, dinner. We had a beautiful 3 course meal. First a luscious salad of romaine and spinach topped with sliced strawberries, roasted pecans and a strawberry vinaigrette, 2nd course was a sumptuous plate of roasted potatoes & mixed veggies with a chicken breast stuffed with mushrooms and sauce, our final course was to die for; a layer of delicate custard topped with fresh whipped cream and fresh blueberries and raspberries and 2 triangular puff  pastries on either side of the dish.
After the plates were cleared we set out to make a bit of money for the Society by holding an auction. Ken Brown was the official auctioneer selling 12 roots, 3 peony prints, an 3 seed lots with several packets of seeds in each lot. The icing on the cake was the sale of "Lemon Chiffon" with a reserved bid of $175.00.

After all the excitement of day 1 it was time to go to our rooms and get some rest before packing and getting ready for the final day.

Day 2: We awoke around 8:30am, cleaned up, packed our overnight bags and headed down to the breakfast room to grab a quick bite and prepare for the day. In the breakfast room we caught up with a few members before heading back to OVBG. 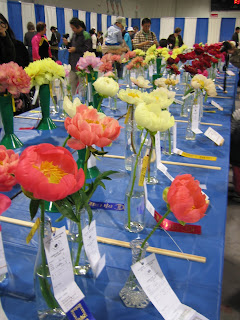 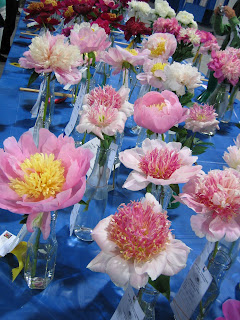 We arrived at OVBG around 10:30am and I started taking some pictures of blooms I hadn’t gotten to the day before. Today we seemed to be in luck with the weather, no rain. This should mean just as busy or busier than yesterday. We toured the grounds on the other side of the bridge and took a few more photos. On our way back to the booth we spoke with some of the vendors, finding out a bit more about the photography club and getting some insight on the metal work. 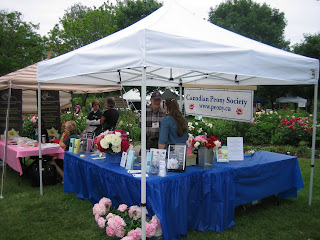 Ron Adams and Bill Wegman were manning the booth this morning and we popped in to see how they were doing. As always, if we can talk about one of our passions were ecstatic. Hubby and I stayed around in case they wanted to go or see something and wound up covering the booth for the afternoon. Bill and Ron both wanted to catch one of the speakers and took the opportunity. (They thoroughly enjoyed the talk.) Hubby and I spoke with many visitors, gave some of the volunteer staff an impromptu lesson on where the seeds are on peonies, sold seeds, cut flowers and gave smiles for free. At the end of the fun filled day we helped pack up the booth and said our goodbyes.
Overall, all I can say is if you have never volunteered for something like this I highly recommend it. You can learn a lot from listening to other members, pick up some tips, and have a great time meeting people and other members. We hope to see you at the next AGM.
Posted by cps at 1:03 PM