An Error of Nature or a New Way of Propagating Peonies? 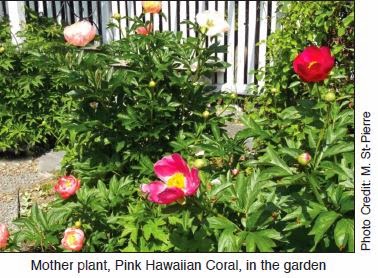 In July 2008, a friend of mine came to visit as the peonies were in full bloom. He quite liked the Potanii tree peony which I had purchased two years ago - and one which I was never too fond of given the coppery yellow colour of its flowers. He, however, was quite taken by the colour and asked me if I was interested in exchanging roots in the fall. When September came around I was quite ready to prepare a root for him, shipping it off as quickly as I could.

Two weeks later, following a conversation with my friend, I received in exchange a plastic bag containing a Pink Hawaiian Coral as well as a few roots which had been cut by the shovel when it was dug up. I had seen this plant before and I had always found the colour quite beautiful. I planted the root horizontally with the ends of the roots side by side at a depth of about 15 centimetres.
In April 2009, the root began growing and produced two stems and a small flower, which I probably should have cut, but since I wanted to see it, I left it intact. Up to this point, the ends of the roots I
had received had shown no signs of life. In September, I decided to move it because it was too similar to the neighbouring Salmon Chiffon peony. When pulling up the plant I had a surprise waiting for me, each of the two roots had a small bud.

So I replanted them next to the mother plant. In April 2010, the mother plant grew and the two root ends with the eyes also had shoots. In other words, I found myself with two new Pink Hawaiian Coral peonies. Was this an error of nature or is it a new, albeit slower, means of reproducing peonies compared to separating the root with existing eyes on a flowering plant? I waited to see how the flowers turned out.

In November 2014, the young peonies which had grown from the roots flowered identically to the mother plant. There can only be one logical conclusion, if an adult peony is transplanted and some roots remain in the transplanting soil, there is a very good chance that several years later, new plants, identical to the one removed, will grow.
Posted by cps at 9:16 AM