Peonies At The Farm 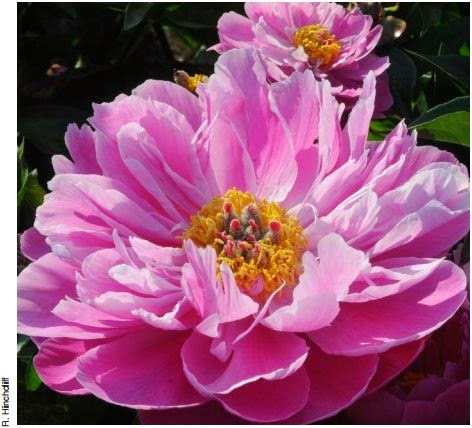 The presence of peonies at the Central Experimental Farm dates back to the 1890's and the early days of the experimental farm system in Canada, when the first director, Dr. William Saunders, assembled and planted a collection of 150 different cultivars for evaluation.  It must certainly have been one of the most outstanding collections of peonies in Canada at the time and likely would have mainly consisted of the highly popular and wonderfully fragrant double lactifloras.

A Broad representation of peonies
Today, the Friends of the Farm help maintain a collection of over 400 different named varieties  and a total of 600 plants consisting of a wide variety of styles and types.  The bulk of the current collection is a broad representation of peonies developed from the late 19th century on - the classic old French and English peonies of Lemoine and Kelway.  You may know some of them, such as 'Le Cygne', 'Primevere', 'Baroness Schroeder' and 'Pride of Langport', to name only a few.

A collection of Professor A.P. Saunders' peonies has been deliberately assembled over the years.  Now totaling 105 different cultivars, we believe it to be the largest such collection in Canada.  Growing up in London, Ontario, and during his university vacations spent at the Farm in Ottawa, Professor Saunders would have learned the technique of cross pollination of flower blooms from his father, William, who experimented in plant breeding.  Widely known and respected as a peony breeder, Professor Saunders was one of the first to use the then recently available species plants to produce earlier blooming varieties and to bring a wider spectrum of colours into the peony world.

The origin of one of the Farm's Saunders peonies is particularly closely connected to the Farm.  In 1928 Saunders wrote that he had taken "some pollen of the species P. coriacea from a plant at the Experimental Farm in Ottawa, Canada" and used it on the lactiflora 'James Kelway' to get a true lavender coloured peony, which he named 'Lavender'.

In the 20th Century, American nurserymen working concurrently with Saunders concentrated on producing the large doubles because that is what the market demanded at the time, cultivars such as 'Florence Nicholls', 'Gay  Paree' and 'Red Charm'.  Like the earlier French and English peonies, they were developed for the cut flower market, so their weak stems were not a great concern because they are cut earlier, at late bud stage and placed into cold storage.

Not all of these peonies were developed by professional nurseryman- some were produced by home gardeners whose cultivars are well represented in the Farm's peony garden.  Nathan Rudolph of Aurora, Illinois, developed the peony 'America', which is likel out most outstanding red variety.  And not all producers were men - Mrs. Mary Freeborn of Proctor, Vermont, registered 22 cultivars and the peony garden hosts her best two 'Angelo Cobb Freeborn' and 'Pico'. 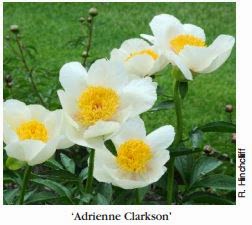 Canadian breeders have not been forgotten.  The Farm's collection includes plants from Brown, Gilbert, Keagey, Brethour, Lossing, Ericson, Cousins and Ménard.  Both 'Elgin', a peony developed by William Brown of Elora, Ontario and 'Coral N' Gold' a peony developed by Lyman Cousins of London, Ontario, appeared on Canada Post stamps several years ago.  In fact, the picture for the 'Elgin' stamp was taken from the Farm's own plant.  Perhaps the best peony known to the Canadian public would be 'Adrienne Clarkson' named for a former Governor General and developed by Maurice Ménard of Laval, Quebec.  Two other plants developed by Mr. Ménard and in the collection and dear to our hearts are the 'Mary Pratte' and the 'George Vorauer' peonies.

Itoh or Intersectional peonies were recently added to the collection.  These are the result of  a cross of tree peony and herbaceous peony and, although developed in 1944, have only now become readily available to the home gardener due to advances in propagation.  Itohs combine the colours and size of the tree peony blossom with the hardiness of the herbaceous peony.  They are described in a seperate article by Blaine Marchand. (Patience, Perseverance and Itoh Peonies)

The blooming season
The first peony to bloom at the Farm is 'Starlight' and, guess what, it is a Saunders peony and it is closely followed by 'Firelight' another Saunders peony.  This is usually by the third week of May.  'Red Charm', the reference peony, usually blooms by the 5th of June, while the big doubles don't bloom until the second and third weeks of June.  By the end of June the bloom season is over, for an over-all period of five weeks of bloom - although admittedly spars at the beginning and sometimes shortened by abnormally hot weather.

The blooming season is the best time to view the peonies but even without their blooms, the shapes of the plants and the configuration of their leaves are interesting.  The collection is located in 14 beds at the north-east corner of the Ornamental Gardens beside the traffic roundabout, and in two more beds just tot he north across the street in the campus sector.  Some individual plants are located around the gardens and the Arboretum houses a large bed of duplicate peonies used as a reserve.

Passionate about peonies since the mid-1980's, Bill Wegman has led the Friends' peony team for over 10 years and runs the seed exchange for the Canadian Peony Society.  He has won many awards at exhibitions with blooms from his own large collection.

Reproduced with permission from 'Friends of the Central Experimental Farm'.  http://www.friendsofthefarm.ca/
Posted by cps at 10:30 AM