On Friday, December 27th, the CPS lost a member who was a true renaissance man. In addition to being a loved professor of Economics at the University of Toronto, Michael Denny was a peony enthusiast, an integral part of the Society, as co-editor of its newsletter with Lindsay D’Aoust and, also with herm the driving force, of the CPS Bloom project.


Michael touched many lives with his charm and his wit – students, people in Southern Ontario, where he lived with Judi and with whom he is intrinsically linked in the peony world, and peony lovers in Canada and the US. 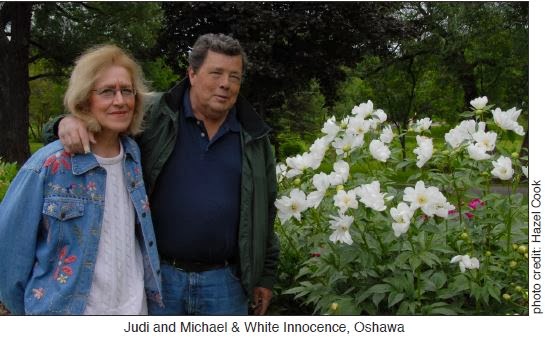 Here are some recollections on this remarkable man.


When I first joined the CPS, I remember hearing Michael and Judi Denny’s names spoken all of the time. I thought they must obviously be ‘movers and shakers’ in the peony community and, indeed, they have been an amazing team working to promote our favourite flower for all the years I have known them.


Two things always make me think of Michael Denny: whenever I hear about the very successful peony show which is now held on a yearly basis at the Oshawa Botanical Garden, and often, from May until late June when the peony group with The Friends of the Farm at The Central Experimental Farm and I, at home, collect data about which peonies bloom when in our area.  This is because Michael and others, including Lindsay D’Aoust, worked to put together The Peony Bloom Time Project (http://peonybloomdate.com/index.htm), which is monitoring bloom time of hundreds of peonies over time so that more reliable information of when they bloom can be accessed on-line.  It is a tremendously useful tool, which allows you to select peonies that bloom together in a certain colour scheme, or a sequence of peonies, which provide bloom over several weeks.  It is also very important to have this information when trying to identify unmarked peonies.  I hope that this project will continue, and I know I, for one, will make a much bigger effort to note this information if it will help keep this project of Michael’s alive.


Michael’s efforts and energy will be much missed, but his legacy will live on through his hard work and enthusiasm and the beauty of his peonies.

My husband Ed and I met Michael and Judy in the early years of the peony society.  Michael was an avid gardener and enjoyed his peony collection along with the many other flowers that he cultivated in his home garden.


Michael was one of a handful of people that moved the Gilbert Peony Collection in 2000 to his home and planted hundred in his gardens in order to grow them up and identify some, so from 2004 on they could be donated to various public gardens across Canada. He also never ceased to amaze me with the hours he put in at the public peony


gardens in Oshawa and the data that he collected that has and will continue to help people choosing peonies for their own use.


On a personal note, Michael came to my home each year the morning of the Oshawa show, which he and Judi had started in 2005, and picked up my entries, always finding time to stop, chat and see what was growing in my yard. He will be greatly missed by me as a valued friend as well as by the Society that he helped so much. 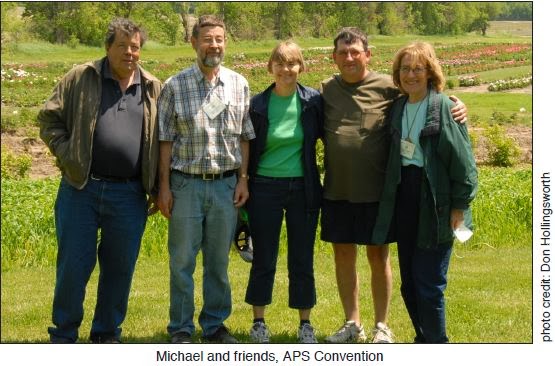 We were so sorry to hear that Michael is no longer with us. He was a delightful man. When we spent time on the CPS stall in Oshawa at the peony show, we could always count on Michael to keep us laughing even in the pouring rain. We shall miss the engaging warmth of his smile.


Michael and I shared many a laugh and lively discussion over the years. The topics were varied but the common denominator was always the peony. Never one to hold back, he would happily interrogate me about why I had chosen such and such a peony for my catalogue or even better, the rationale behind my price list. He kept me on my toes.


Michael created the peony bloom dates project and collected data from across North America. The result was the idea of 7 Weeks of Bloom.  He made the data available to anyone who wanted it.


Michael was a very generous man. He gave countless hours to the bloom dates project, the Oshawa Botanical Garden peony collection, the Gilbert Collection, not to mention being co-editor of the CPS newsletter. He was always willing to share his thoughts as well as his peonies. Both he had in great abundance! I will miss him enormously. 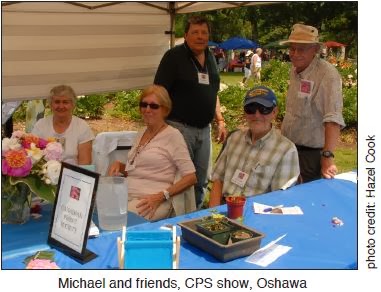 Over the last years, I have had the greatest of opportunities to learn first-hand how to dig, divide and plant peonies with Michael.  I began digging with Michael the Gilbert collection at their home before I even realized the significance of this prized Canadian collection.

It was here that, alongside Michael, I learned just how different the roots could be in their growth habit and just how wide you need to dig so that all of the root could be removed from the ground. Year after year, we continued to dig the Gilbert collection together until we at last finished this great undertaking that Michael and Judi had taken on to preserve this collection.


Washing, labeling and packing became the job of Judi and I. Michael usually gave the orders on what and where to plant the new peonies as they arrived by mail order.  I would watch Michael intricately divide, year after year, with his assortment of knives and saws in the shade of the old maple tree. But it was not until this past spring that I was actually given the opportunity to divide and label their prized collection.


My own collection grew each year as Michael and Judi generously gave me any tidbits of roots that they were deemed too small to sell or donate.  Often in the spring, after a good days work in the garden, Michael would shout "check out the compost pile" and off Judi and I would trudge and find many sprouting peonies. Though unnamed until they finally bloomed many years later. I was happy and grateful to dig them up and add them to my own collection.


I know that whenever I see a peony I will think of Michael and the many wonderful things that he taught me about growing peonies.


We have so many memories of Michael, being friends for so long. Mike's great love of food - for years, he would simply call and say let’s eat  - so Dennis and I would meet with he and Judi in Cobourg or Port Hope and spend the evening laughing over fine dining. We always aimed at 3 or 4 times a year – great fun. Upon our return from Florida in November, Michael was not able to travel so Judi cooked us dinner at the farm. Michael mentioned that he would not see the peonies bloom again, which saddened me. Being familiar with the floral trade, I managed to buy 15 stems of red, white, and pink blooms of cut peonies and delivered them to the farm to prove him wrong. He did see them bloom. Knowing Michael as we do - he was terribly moved and had he not held up his guard I am sure that he would have cried. (As we all know he was not a crier.) But a few days later he brought us to tears with a short email of thanks saying that the great room smelled so fragrant of peonies. That was our Michael. 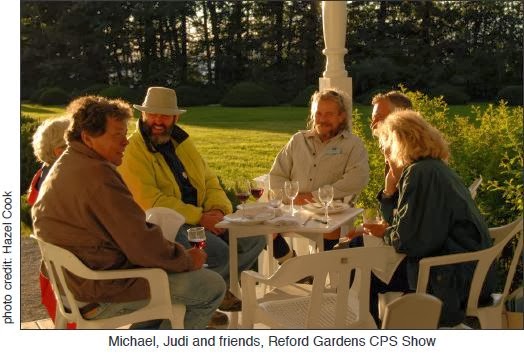 Joe and I have had the privilege of spending many occasions with the Dennys at the Oshawa Botanical Gardens, CPS and APS conventions and at their home. Whether we were most of the Canadians attendees at an APS banquet table or simply chatting closer to home, Michael quietly added humour and laughter to the never-ending discussions of all things peony.


During events, such as the Peony Festival in Oshawa, Michael would quietly record bloom dates and check peony labels in the gardens leaving the limelight for others but always supportive as a truly great advocate for growing and preserving peonies.

Michael was a gentle giant of a man. I met Michael through the Canadian Peony Society, and Blaine and I used to visit him and Judi once a year at their beautiful home. He was an imposing man: large and with a full head of black hair. When I discovered that he was a distinguished mathematics professor at the University of Toronto, and learned something about his professional reputation, I was somewhat intimidated. But Michael always had a twinkle in his eye. He was rather quiet and shy. He seemed diffident and self-effacing, and he had a sly – and dry – sense of humour, and a low but contagious chuckle. He was very generous – with his time, his knowledge, and his plants. He and Judi seemed to compliment each other perfectly, and we always looked forward to seeing them. 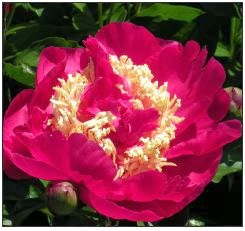 Michael leaves his wife Judi, his two sons Chris and Sean and three grandchildren.
The City of Oshawa, recognizing the key contribution
the Dennys made to the Oshawa Botanical Gardens, will honour them by designating the peony gardens, to which they contributed so much, The Michael and Judi
Denny Peony Garden. A most fitting tribute indeed.
Posted by cps at 4:28 PM