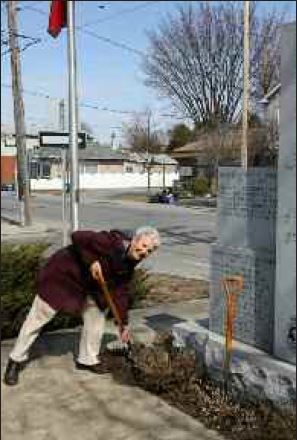 I quickly became enamoured with the peony world upon joining the peony team and Friends of the Farm at the Central Experimental Farm, here in Ottawa. Added to which, during my second year with the group, the Canadian Peony Society had their annual show at the Governor General's official residence. I spent the weekend helping out at the show. We had a breathtaking display of blooms
displayed in some of the impressive formal rooms. The then Governor General, Adrienne Clarkson, was presented with a newly bred, yellow peony, named for her. I was hooked!
A little later, I joined the gardening group, Vanier Beautification which, amongst other things, tends uncared-for City planters and, generally try to keep my downtown area of Vanier (in Ottawa) looking as good as it can be. It's a 'colourful' neighbourhood within walking distance of Parliament Hill. Our community has a high francophone component and, in fact, was its own one square-mile little city,
with its own City Hall and Mayor until amalgamation with Ottawa. The selection of material for our
five, 1-meter square planters is a constant challenge, as are money and water. So, when the leader
of the peony gardening team, Bill Wegman, generously offered some of his peony seedlings, I jumped at the idea. After 3 years, we had our first blooms. What excitement! Bill is a peony breeder, so my peonies are beautifully miscellaneous. But they have lovely long, strong roots so are difficult to 'pinch'. Upon hearing about my local efforts and the success of my peonies, Blaine Marchand, now
the CPS Past President, offered me some mature roots from his collection that originated in the Ottawa River cottage garden of Lady Borden, the wife of Sir Robert Borden, Canada’s Prime
Minister. The peonies are either white or red and I obtained permission to plant some around our
small, small Vanier Cenotaph. The rest of the roots have either gone to other people looking after boxes or are in a holding area in the garden of my apartment building and will be distributed later.
We do struggle with our Vanier beautification as garbage and graffiti are a constant bugaboo; but, with the efforts of the Vanier Beautification gardening group and the generosity of members of the Canadian Peony Society, our little neighbourhood is certainly much improved.
Posted by cps at 6:46 PM