by Daniel Lessard
“I don’t believe you… that’s not a peony, there aren’t any yellow peonies.”  My neighbour was fixated. How could I convince her that it was indeed a peony? In fact, it is ‘Bartzella’, one of the most beautiful peonies on earth. The peony in question had cost me a small fortune in 2007 - it was so expensive in fact that I never confessed the true price to my wife.

The first time I saw a ‘Bartzella’ was in the Allan Rogers book “Peonies”. I immediately decided that I had to own one, but where to find it? I checked the list of vendors on the
Canadian Peony Society website and finally found one at the Pacific Rim Native Plant Nursery in Chilliwack, BC (a bit far to order a peony but all of my fears were soon abated).  The plant was a good size and it produced a flower – a single flower mind you – the following spring. All summer, I pampered ‘Bartzella’ to ensure it would survive though such

care is not really needed because this peony is robust and capable of enduring all conditions.  Two years ago, I bought a ‘Claire de Lune’ from a vendor who had convinced me, with photos as evidence, that it was a yellow peony. I was fooled, but I have never regretted 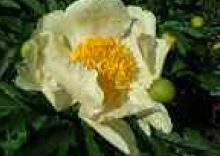 buying it. More ivory than yellow, ‘Claire de Lune’ is a beauty, which delighted my neighbour who was convinced that peonies were only available in pink, red and white.  Around the same time I discovered another yellow peony that had been chosen as the 1996 Peony of the Year by the American Peony Society. Once again my interest was piqued, and I acquired a ‘Garden Treasure’. Though it may disappoint you to hear it, ‘Garden Treasure’ is pretty but not nearly as seductive as ‘Bartzella’.
Despite this, I cannot imagine a collection of yellow peonies


without a ‘Garden Treasure’.  The third in my collection is a ‘Border Charm’. Lovely for sure, but
she’s sulking because I moved her twice. It didn’t produce a flower last year, but it is nevertheless comfortably planted in my rock garden in plain view for all my neighbours and I hope that she will be prolific once again this spring. I have also promised to never move her again…

I recently read that the authentic and true yellow peony - the mother of all the yellows - was a peony with an improbable name, which intrigued me: ‘Mlokosewitschii’. The English call it ‘Mloko the Witch’ or the sorceress.  She has taken her time to become established, but her delicateness 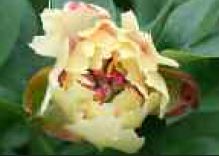 delights me. Unfortunately, she only visits briefly and last spring, a storm destroyed her first flower to my utter disappointment.  Next step: several of the beautiful yellow
Japanese and Chinese peonies even if I have no more space in my garden unless I sacrifice some of my old favorites such as
‘Mr. Jules Élie’ or ‘Festiva Maxima’.


Bring on spring! I almost forgot to mention that I gave a ‘Bartzella’ root to my sceptical neighbour. I hope that she gets at least one flower…