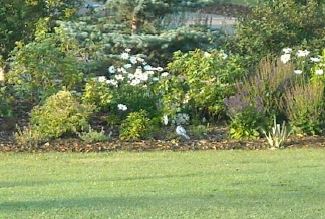 A four-acre property is a lot of playground, even for an obsessive gardener. My husband and I purchased this raw piece of paradise, just east of Calgary, nine years ago. There was a single boundary of spruce trees and poplars lining half the sides and the front of only two acres, with no other vegetation other than untouched prairie pasture.
The daunting task of tackling this was initially overwhelming, but, as a Landscape Designer, I approached the entire property with a Concept drawing. Considering the basic principles of design, and with our unique Chinook climate and weather, clay to grassland soil conditions, and saline water
composition, in mind, my plan was cultivated.
Each year, I would cut out a new bed, with my husband, the ―Lawn Ranger, fretfully complaining of the amount of ―lawn I was removing. Thankfully for him the septic field was safe from my clutches.
Since discovering the high saline water content in our area, plant choices were initially restricted to trees and shrubs, which would tolerate the clay and salt. Amending the soil and catching rainwater were to become the keys to our success.
Each spring, the new beds would display their natural low-lying areas by becoming a bog. I can safely say that peonies do not like their roots waterlogged! However, working with nature, rather than against it, I found my efforts became less each year. Watering is by rainfall only, except for the plant‘s first year.
Spring is my busiest time of the year, with cutting back last fall‘s spent foliage, amending soil with my kitchen and fire pit compost rather than fertilizer, and new plantings so as to take advantage of the spring rain-fall. Mulch is essential to retain the moisture in our short, but hot summers.
My peonies, even in their first season debut, reward me. There is always a bloom or two! Even though it is better to nip off any flower buds that first year, to encourage root development, I just can‘t bring myself to do it.
My goal for the gardens was to provide a four-season display of bloom, concentrating on mid-summer to fall as we have created an outdoor wedding facility. While we have carefully chosen roses and other shrubs and perennials to ensure continual blooming, I also wanted to ensure there would be magnificent peonies flowers as well. Although I adore most all peonies, I try to choose mostly white, later (weeks 5-6) blooming herbaceous and Itoh varieties, such as Ave Maria, Cora Louise, Honey Gold, and Nancy Nicholls. Storing my buds in refrigeration, and drying them, have become my new study, but more of this at later date.
Overall, I feel truly blessed to live here in Zone 3 Alberta. I think we have the best growing conditions anywhere for peonies!